How Does COVID-19 Impact the Battery Industry?

Already under siege from the US-China trade dispute, the global lithium-ion battery market must also deal with impacts from the coronavirus..

Much of our modern electronic world is powered by lithium batteries, from portable devices like cell phones, laptops and wearables to full-sized electric vehicles (EVs).

Globally, the lithium-ion battery market was valued $36.7 billion in 2019, and is projected to hit $129.3 billion by 2027, according to Allied Market Research. But the coronavirus pandemic will affect that forecast with major disruptions to sales as well as the supply chain. China figures predominantly in the lithium battery supply chain.

The U.S. State Department’s Energy Resource Governance Initiative notes that over 80% of the global supply chain of rare earth elements, important minerals for electric vehicles and wind turbine components, is controlled by China. The Asian has recently giant secured lithium mining operations globally to meet its demand for EVs.

To learn more about these issues with lithium batteries and the supply chain, Design News talked with Francis Wang, the CEO of a battery tech company called NanoGraf. What follows is an edited version of that discussion.

Design News: How is the virus prompting companies to explore production outside of China?

Francis Wang: COVID-19 will certainly change the way many companies source batteries in the future. Over the past five years, China has dominated the lithium-ion battery supply chain from raw materials and electrode material production to battery and pack production. Original Equipment Manufacturers (OEM)s have moved away from historically strong Japanese and Korean producers to lower-cost Chinese sources.

But the virus has brought to light weaknesses in these China-first sourcing strategies that had lain dormant before. The result may be that production will shift back to Japan and Korea -- at least for certain products like consumer electronics.

The one area that will likely remain concentrated in China, however, will be battery production for electric vehicles. That’s because roughly 20-30% of the pollution in major cities in China is produced by internal combustion engines. China has known that’s a problem for a long time, so they’ve been supporting the increased use of EVs through government funding. So, because domestic demand is so high for those batteries, China will make sure to maintain battery production domestically.

Design News: What will this mean for the battery industry as a whole?

Francis Wang: I predict in the near-term there will be a greater emphasis from global OEMs to find a more balanced lithium-ion supply chain diversification across Asia (shifting back to Japan and Korea). In other words, a greater emphasis on risk mitigation and less so on cost.

As I mentioned, China certainly has a large enough growing internal market and strong enough central government directives on electrification of automobiles that I don’t expect to see massive disruptions in China’s battery industry growth trajectory.

In the long-term, the virus will more than likely stimulate production capabilities outside of Asia. The Energy Storage Grand Challenge by the US Department of Energy is a good example of efforts by the US government to swing production of “essential” technologies and capabilities to North America. The virus is only driving home weaknesses which have already come to light through the recent trade war with China.

Design News: Are any other changes happening with the way companies are sourcing batteries or considering what kinds of batteries they use in their products as a result of the virus?

Francis Wang: We also see broad changes in attitudes regarding battery-related intellectual property (IP) – Freedom to Operate (FTO) considerations outside of China. Well-established Japanese and Korean battery manufacturers are reconsidering the risk associated with Chinese component sources that may not have FTO. I predict that we will see a greater diversification to components and final products outside of China. Again, these are perhaps all related to the Chinese-US trade war, but for those who develop technology, are very welcome changes.

[Editor’s Note: Freedom to Operate (FTO) considerations are used in identifying and analyzing the patents of others that may subject a company to patent-infringement liability.]

Design News: What do you see as COVID-19's impact on European EV manufacturers?

Francis Wang: The EU is one of the fastest-growing markets for EVs in the world. But up until this point, it’s been able to rely on the enormous manufacturing capacity of Asian auto producers, which helped to keep cost parity with traditional cars. However, with COVID-19 disrupting those supply chains, EU auto-manufacturers will need to start thinking about ways it can continue to keep EVs cost-competitive.

Though it may be doubtful that Europe could surpass the manufacturing leadership of Asia, particularly China, it is probable that the COVID-19 complications to Asian supply chains will drive the EU to invest much more in innovations around battery technology.

Francis Wang: Unlike the US, several European countries have begun investing in their nation’s battery industries. Germany, France, and Poland have all recently announced major cash injections into their battery industries, with Germany’s commitment topping $1 billion. Even so, batteries are still contributing to about 40-60% of an electric vehicle's overall cost. Driving down the battery cost is crucial to making EVs affordable to the general public.

In 2018, Toyota's executive vice president and head of the company’s battery business, Shigeki Terashi, said that “the one who conquers batteries will conquer the electrification of cars. "This influx of cash into European battery efforts signals an acceleration of the race to conquer batteries. With the cost of EV’s so dependent on batteries, we will most likely begin to see more investment into researching how to produce these batteries more cheaply.

Likewise, the supply chain complications caused by COVID-19 may also prompt the EU to begin investing in local production of key raw materials. China’s One Belt, One Road Initiative was highly effective in consolidating sources for battery producing materials, such as lithium and cobalt. But very recently, a deal was announced between European Metals and CEZ Group, one of Eastern Europe’s largest power utilities. Considering that European Metals is one of the only lithium miners in all of Europe, this deal is especially significant, perhaps forecasting a similar consolidation of material sources within the EU. 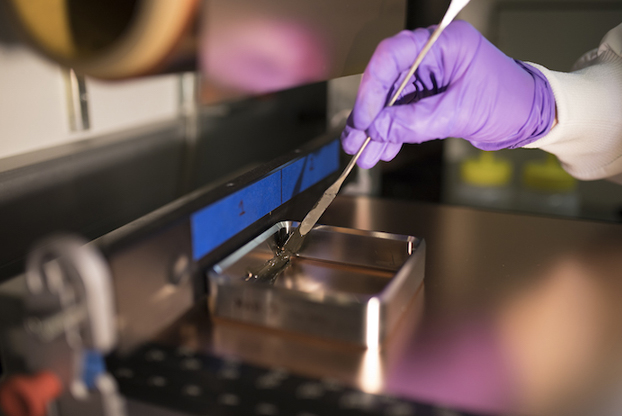 Scientist applies silicon slurry onto a current collector to create an anode electrode for lithium-ion battery tests. (Courtesy of NanoGraf)

John Blyler is a Design News senior editor, covering the electronics and advanced manufacturing spaces. With a BS in Engineering Physics and an MS in Electrical Engineering, he has years of hardware-software-network systems experience as an editor and engineer within the advanced manufacturing, IoT and semiconductor industries. John has co-authored books related to system engineering and electronics for IEEE, Wiley, and Elsevier.