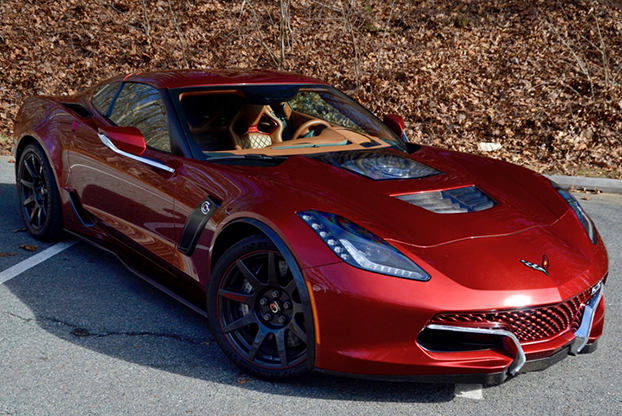 The Washington D.C. suburbs may be best-known for pricey real estate and traffic congestion, but Rockville, Maryland is also a hotbed of electric vehicle development, as the home of Genovation Cars and its 212-mph GXE electric supercar.

Genovation founder Andrew Saul launched the company in 2008 with a mission to develop a low-cost EV, which marks a stark contrast to the $750,000 price tag on each of the 75 GXEs the company plans to sell. The GXE’s dual electric motors combine to produce a staggering 800 horsepower and 718 lb.-ft. of torque.

In 2008, Genovation found ample surplus automotive engineering capacity in post-financial meltdown Michigan, recalled Saul. The company contracted Tata Technologies there to develop a very green car that was going to use soybean resin and recycled plastic bottles. When the hoped-for government grant failed to materialize, “we pivoted to do an electric Corvette,” Saul said.

Today’s GXE prototypes are built on the seventh-generation Corvette ‘C7’, as will the future production versions. The first prototypes were built on the previous-generation C6 Corvette. Now that the company has settled on the C7 as the GXE final form, the prototypes have gotten both faster and more refined, Saul said.

Even the early C6 car topped 200 mph and accelerated to 189 mph in the standing-mile acceleration test. “We put that car to rest when the C7 came out,” Saul said. 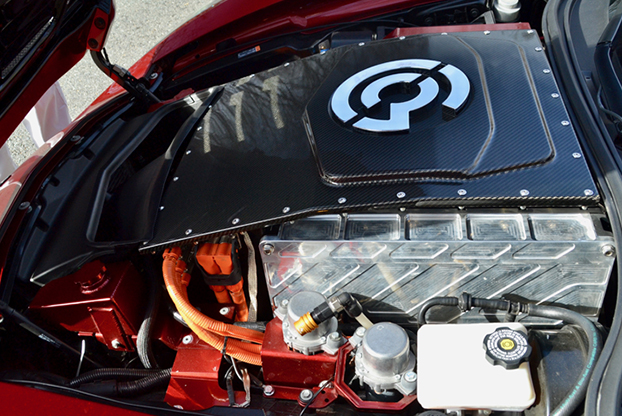 The GXE’s current specification is an array of five 800-volt battery packs distributed throughout the car for a total electrical storage capacity of 52 kilowatt-hours. The final production version of the car will have an even 60 kWh of storage good for 175 miles of driving range, and the packs will be located to move the GXE closer to a 50/50 weight balance. It will also have better thermal management to shed the heat generated by tapping that power, and the result of these upgrades is predicted to be a new top speed of 220 mph.

While Chevrolet has moved to the mid-engine C8-generation of the Corvette, Genovation is satisfied with the performance of the GXE using the front-engine C7 chassis. “I feel confident with what we’ve done with the C7,” said Saul. “It is a very good platform. It is very rigid and makes a very fine car.” 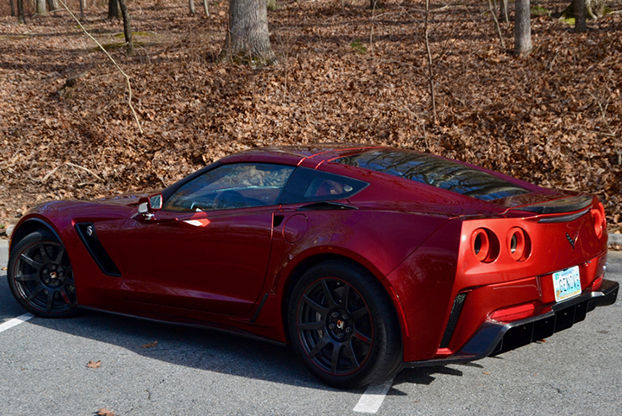 Genovation has swapped out Chevrolet shock absorbers and springs, including the Corvette’s traditional transverse rear leaf spring, in favor of computer-controlled active shock absorbers with coil springs. The active suspension control system is a product of DSC Sport, of Jessup, Md.

This edition of the GXE wears 2019 Corvette bodywork with some detail flourishes to distinguish it from the gas-powered Chevrolets. The active rear wing, taillights and outside mirrors are all unique for Genovation and the company is continuing to refine the final design of these parts, because the current iteration of the mirrors is not very effective at showing what is behind the car. Each production GXE will be delivered in its own unique custom color, ensuring no two of the cars look alike. 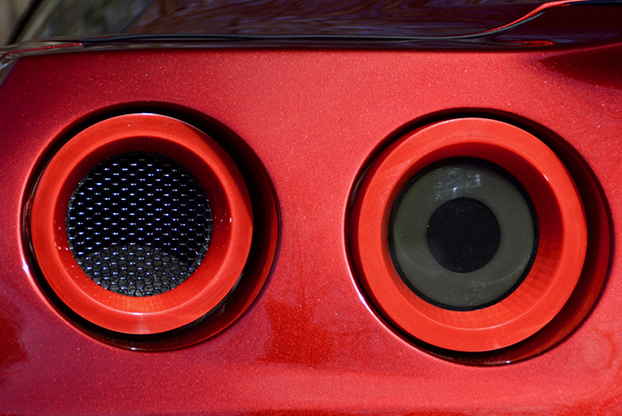 Eventually, Genovation will move the GXE to its own bespoke body design and the company is in discussions with a couple designers about this now, said Saul. “It will be all carbon fiber and have less drag than the current design,” he said.

We were able to drive the automatic transmission prototype and found the GXE delivers on its promise of absurd acceleration. There is a high-pitched jet engine sound that is also audible in drive-by videos of the car that lends a high-tech aura to the GXE. In high-speed testing at the former space shuttle runway at Kennedy Space Flight Center in Florida, the crew occasionally panicked that a jet was approaching to land when they heard the GXE making a pass, Saul recalled.

The prototype we drove seemed very customer-ready, but finalizing the details of various system calibrations takes time, so there’s still a bit more to do, Saul said. The fortunate few who are able to buy Genvovation GXEs will enjoy a really special sports car.